A Man After My Own Sense of Humor

Before meeting Jeff Patton in person, I already appreciated his sense of humor as I’ve been reading his book, “User Story Mapping.” His dry humor was no less apparent when I met him at a recent Agile NYC Meetup.

When I arrived to hear Jeff’s presentation on “Minimum Viable Product,” the room was full with some 40 or so people, seated and chatting amongst themselves. I grabbed a slice of pizza, found a seat, and noticed Jeff sitting by himself before an overhead projector at the front of the room. Then he wrote on a paper and projected on the screen: “I will start in 20 minutes. Until then we will just sit here and stare at one another.” I chuckled. Still no one said anything to Jeff. We were a room full of IT types. We are awkward and introverted, stereotypically speaking. So, it’s not that surprising.

But I approached Jeff to introduce myself. I shook his hand and said, “Hi, Jeff. I’m Sam. If I’m going to be staring at a guy for that length of time, I at least want him to know my name. I’m looking forward to your talk. I’ve been reading your book.”

To which Jeff responded, “My children thank you for buying the book. It will pay for their college. At least the first one. It’s the second one I’m worried about. I’ll have to write a second book to pay for him, I guess.”

I told him, “You’re welcome. I’ll have to explain to my son that he doesn’t get to go to college because Dad spent all the money on books.”

We shared a mutual chuckle.

Jeff’s presentation included his thoughts on “Minimum Viable Product (MVP)” and why he feels this is not the best of terms. People define MVP in so many different ways that it gets confusing. Does it mean the “bare minimum?” Does it mean “just enough,” or “good enough?”

In his book, Jeff states:

Minimum viable product is not the crappiest product you could possibly release.

But how many of us interpret it that way? We say to ourselves, “Well, this isn’t the absolute worst product. It has some useful features. It could be a lot better. But it will get by for now. Besides I have to release something at the end of this sprint.” Right? I know I’ve been there. I’ve operated under the idea that MVP meant “good enough.” That has lead to the release of crappy product at times. If that’s MVP, it’s not worth much.

Jeff, again in his book, use the word “solution” as an alternative to “product” and gives this definition:

The minimum viable solution is the smallest solution release that successfully achieves its desired outcomes.

In his presentation, Jeff phrased this as:

The smallest product release that could meet its desired market outcome.

Of note is his use of “outcome” and not merely “output.” The output of a release may be a product. But what is the outcome of the release? Did the release achieve the desired effect in the market? Did it truly solve the customers problem?

Jeff took us beyond a focus on “product” to include the idea of minimum viable solution as a learning opportunity. Just as we aim to produce a minimum product for a customer, we can also aim to prove hypotheses and assumptions. We can “build to learn” just as we “build to earn.”

A minimal viable product is also the smallest thing you could create or do to prove or disprove an assumption.

My programming experience has included times when a proof of concept (POC) would be needed. More times than not, this was done by a senior architect or senior technical analyst. There was no input from the rest of the development team. Often a POC would be so involved it could be considered a project in its own right. It was truly solutioning being done by one person.

So the concept of approaching learning in a minimum viable product manner was refreshing to me. Why build out a large solution to test an idea? Why not build the minimum needed to prove or disprove that idea? It seemed like common sense after hearing Jeff explain it.

Now… How do I put it into practice in my current work? 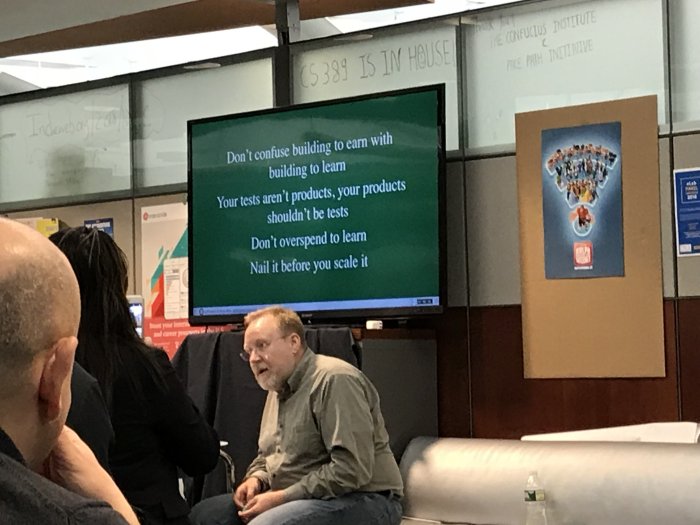 As you can see in this second photo, Jeff covered more than just the things I pointed out. He had the room fully engaged in what he was explaining. I left hungry for more. (I was also literally hunger. Two slices of pizza and a beer in Penn Station took care of that before I boarded a train back to NJ.)

I’m nearly finished reading Jeff’s book. I may write another blog post on that after I digest it a bit more. I highly recommend it. Here’s a link to it: